29 members and spouses (u3a members) attended the lunch.  Some walked and some drove to Brize Norton.

It was a damp morning; the walk was from Carterton via the Brize Norton Road, continuing on to Brize Norton.

Arriving at The Chequers drinks were purchased and then we were shown to a room which we had to ourselves.

Until the lunch was served the noise was deafening with all the chatter. The lunches were served on time, hot and very nice, and the room was almost silent.

After paying for our lunches those that came by car departed and then the walkers split into 2 groups.

One group retraced their steps back to Carterton; the other group walked back via Kilkenny Lane.

Thank you to those that attended and for the Members support throughout the years.

Our next walk is on 18th January 0930am from the car park, 5 miles starting at Tar Lakes Cogges Road Witney, and it could be muddy!  Pam 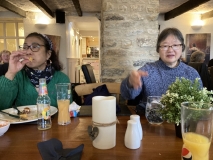 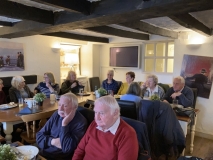 We are able to use the Community Centre so it will be meeting as normal.  To allow us to keep you as safe as possible please register that you will attend so that we know how many are attending.

The last committee meeting was held on 10 January 2022 on Zoom.

The next committee meeting will be held on 14 February 2022 at Town Hall.

This website uses cookies to improve your experience while you navigate through the website. Out of these cookies, the cookies that are categorized as necessary are stored on your browser as they are essential for the working of basic functionalities of the website. We also use third-party cookies that help us analyze and understand how you use this website. These cookies will be stored in your browser only with your consent. You also have the option to opt-out of these cookies. But opting out of some of these cookies may have an effect on your browsing experience.
Necessary Always Enabled
Necessary cookies are absolutely essential for the website to function properly. This category only includes cookies that ensures basic functionalities and security features of the website. These cookies do not store any personal information.
Non-necessary
Any cookies that may not be particularly necessary for the website to function and is used specifically to collect user personal data via analytics, ads, other embedded contents are termed as non-necessary cookies. It is mandatory to procure user consent prior to running these cookies on your website.
SAVE & ACCEPT